Binary thinkers have a difficult time improving their health.

Actively approaching a dilemma with the thought process that there is one “right” extreme and one “wrong” extreme is a sure fire way to run into some serious problems.

There have been many pieces of health advice which appear to be helpful on the surface, but can cause issues when taken to an extreme.

As with most things, the poison is in the dose.

Or, in the world of health (and to our online training clients), it’s put like this:

Just don’t eat them all.

Bad “Good” Advice:  “Too much fat and cholesterol is killing us.”

In 1984, Time magazine published an issue with this cover: 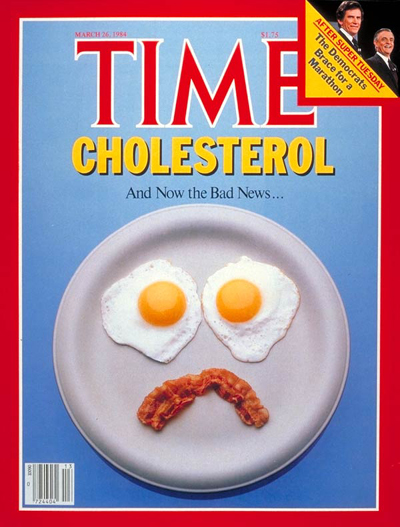 The article itself was a media sensation.

It demonized fat and cholesterol, claiming they were the direct cause of numerous health issues.

Ancel Keys’ work on the “Seven Countries” study was references, which looked at the correlation between dietary fat and blood cholesterol levels.

The study has since been lambasted, as it was found that Keys cherry-picked his data in a classic case of confirmation bias.

Marketers jumped all over the opportunity to shill low fat products to the public.

With “fat” demonized as “bad”, all a company had to do was lower the fat as much as possible (often adding sugar in the process to make it palatable), and call it a “health” food.

We bought it (and all the low-fat products) hook, line, and sinker.

Our pantries became a sea of Snackwells, our food got sprayed with “I Can’t Believe It’s Not Butter” (yes, I can), and we ate our fat-free bagels plain.

Although fat isn’t necessarily the cause of all of our health problems, we still eat too much of it on a per capita basis.

The biggest problem with fat is the excessive amount of calories it has in it – over double the calories of carbohydrates and protein.

Time magazine, who has since retracted their piece and admitted not all fats are detrimental, never thought we would become a nation with a shopping cart full of fat-free muffins.

Eating lean proteins, veggies, fruits, and supplementing with whole food fats such as olive oil would go a long way to protect our health as a whole. Enjoy your saturated fats, but be mindful of them and use them in moderation.

Bad “Good” Advice:  “Too many carbs are killing us.”

After realizing that perhaps fat wasn’t (only) heart attack producing killer out there, in 2014, 30 years after their “anti-fat” cover, Time came out with this issue: 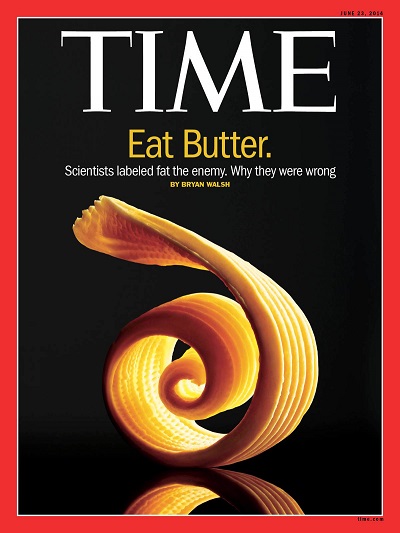 This time, the issue wasn’t fat. Fat was now our “friend”.

The new science had emerged, which delighted Atkins proponents, the Paleo crowd, and the Gary Taubes fanclub.

Fat was no longer the enemy, but all signs pointed directly at carbohydrates being the culprit.

Carbohydrates and added sugars were looked at as the new food demon, causing inflammation, high blood glucose levels, weight gain, and a life of misery.

Fat was out of the doghouse and into the limelight. A nation of Jimmy Moore wannabes proudly melted their sticks of Kerrygold over top of their pans of bacon and topped them off with an untrimmed porterhouse steak.

Since fat was no longer “bad”, it became thought of as a “health food”, and with its newly-shined halo, all things saturated became hot sellers at the grocery store.

True story:  Fat was never the “killer” many claimed it was.

It didn’t need to be avoided at all costs.

But the fact that it wouldn’t cause immediate death upon ingestion doesn’t mean it suddenly became everyone’s go-to-dietary staple.

If calories are unaccounted for, your odds of long-term health success are slim.

Enjoy your whole foods with fat in them. Don’t consume fat for the sake of health; but don’t avoid it in the name of health either.

Eat mainly whole foods. Make some protein choices on the leaner side, and some on the fattier side. Get in your fruit, your fiber, and your whole food carbohydrate choices.

Steer clear of bags and boxes at the grocery store and shop on the fringes.

You know – stuff your Grandma used to tell you.

Breakfast is the most important meal of the day, or so they say.

In certain time periods, this may have been totally correct. 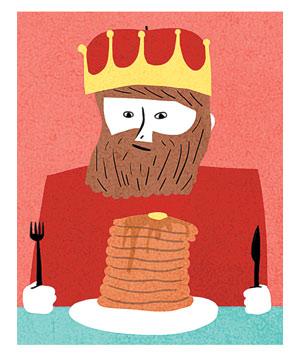 In 1800, if you were going into town, you may have been hitting the road at 8 am and walking 10 miles, and turning right around and doing the same thing in the afternoon. You may have needed to eat breakfast like a king to get enough energy in you.

In the 21st century, though, we don’t require nearly as much energy to drive our BMW’s into our parking garages, take the elevator to our cubicles, and sit at a computer chair for 10 hours per day.

The underlying thought here was that eating at a certain time (late at night, for example) would cause fat gain in isolation.

This has been disproved in clinical studies as well as in a massive quantity of anecdotal evidence.

When you eat has much less bearing on your fat loss than how much. You can eat many, small meals, a few bigger meals, or even just once.

Preference leads itself to compliance, which in turn will determine your success.

Following this advice blindly isn’t the WORST idea ever.

Especially since if you truly do this – eat a large breakfast, a light lunch, and a small dinner – you will be indirectly controlling your calories.

A calorie reduction is what causes fat to be gained or lost, not the size of one, specific meal.

Those who ate larger breakfasts started off the day happy to be following this “good” advice. A huge meal will do that for you.

The issue was later in the day when the “queen” and “pauper” parts kicked in.

Not many people have the willpower to eat next to nothing in the evening hours when they are relaxed and away from work.

Are you super-busy from the moment you wake up until 7 pm? Then eat “just enough” while you’re busy and distracted.

Keeping calories controlled is your ultimate goal. Using appropriate strategies in order to lower your overall consumption should be used whenever possible.

There is nothing wrong with eating a good sized breakfast – or lunch – or dinner.

But if you make all three of your meals “king sized”, you will soon find your pants in the same category.

In the late 2000’s, minimalist training  and dietary programs became all the rage.

Thanks to Crossfit, the barbell regained some of its former strongman (and woman) glory, and powerlifting became an obsession for many.

The Big 3 grew in popularity exponentially, and many gym bros went from 25 sets of bicep curls per day to 3 sets of squats per week.

These minimalist approaches, coupled with a minimalist, macronutrient style diet (which often included fasting) taught many a valuable lesson – calories-in, calories-out is the name of the game in the world of fat loss.

It doesn’t matter if you do cardio or not. If you control your diet, you will lose fat.

Upon this realization, the pendulum swung even further into the anti-cardio camp.

Lifters everywhere became overly concerned that a slow, 45-minute jog would leave their leg muscles catabolic and hinder their recovery for their next training session.

People began using the elevators over the stairs, and claiming the term “rest day” meant that you must sit on the couch, no questions asked.

If not taken to extreme measures, there will be no negative side effects from additional activity.

You can’t “outrun your diet”, as the saying goes, so be sure your cardio routine isn’t your free pass to binge at will.

We should have used some common sense. Jogging never made anyone fat, caused their muscles to shrink, or made someone lose their gains.

The overall lifestyle choices of the trainee matters much more than whether or not you decide to train for a 5k.

Whenever the “hottest new research” comes out, be sure you give it some context.

The world isn’t binary, full of 1’s and 0’s for you to toggle at your whim.

Always keep a level head and strive for your personal best.

The middle of the road is the road less traveled.

Yours in seeing the big picture,