We hear all the time that we should “give zero f–ks” about what others think.

That advice is so trite and commonplace, it makes me cringe when I see it dispersed.

Hell, I even do the same thing from time to time with our online clients.

Sometimes, people come to us and they already lift and count their macros. They’ve taken our free fat-loss course, and they are getting the results they’re after.

These people make ideal clients. Their behaviors and habits are firmly in place and what they need is optimization.

There’s a dirty, little secret in the fitness world:  Coaching for “stage prep” can be an easier process than coaching the general public. Everything is objective. If the client isn’t crushing their macros and lifting hard, they aren’t serious about being on the stage.

Compliance is everything – and these clients, the “serious” ones – truly give “zero f–ks”. They are gonna do what they’re gonna do. They’re the people who bring their tilapia and rice to Thanksgiving dinner, and f–k you if you think it’s weird.

On the other side of the spectrum, we have people who give a f–k about EV-E-REEE-THING.

They’re convinced everyone at the gym is pointing at them and recording their crappy squat set to mock on Facebook later.

They’re certain everyone saw them pass on dessert, and they’re embarrassed that everyone knows they’re dieting.

They don’t want to order chili cheese fries, but they feel like they have to. Their friends will give them shit if they try to order something sensible.

Sometimes the best advice is to tell someone to “get over it” and go do it anyways.

But for the individuals who are a bit more stubborn than that, we offer a bit of advice in these situations.

We advise you to closely look at the morality of the situation, and determine if there is even morality at all.

Morality is rightness or wrongness, determined on a personal and human level.

If you are being moral, you are keeping the thoughts, feelings, and emotions of others close to your sleeve.

There are certain actions which are wrong, no matter what way you look at them:

These actions have clear and distinct moral guidelines. There is little “grey area”. Only a right or wrong.

Many of the items we feel “guilt” or “shame” for in our society actually have no morality whatsoever. We are simply conditioned to feel this way due to the action being deemed “right” by our societal perceptions.

In this scenario, should you “give a f–k”?

At first, you likely thought, “Yes, of course, that isn’t ‘right'”, but let’s look at that scenario more closely.

What is morally right or wrong about leaving work?

Is the action of leaving a morally wrong action?

Your co-workers may be upset with you since they have to work longer hours, but they can exercise their right to leave as well. Work isn’t a requirement by law. Perhaps you’ll get reprimanded for leaving early, but that’s up to your boss, not them.

There’s nothing “right” or “wrong” with leaving your work a few hours early. It doesn’t really matter if you have things going on or not. This is a situation without morality. Leave if you wish, and feel nothing as a result.

In this scenario, you have emotions and feelings attached to your decision to turn down alcohol after your golf round.

You are equating drinking beers with spending quality time with your friends.

You feel as if you did something wrong.

In reality, you made the conscious effort to improve yourself. If anything, you should feel happy and pleased with yourself after making this choice.

You didn’t drink alcohol with your friends. That was the choice YOU made. Nothing else.

If you had belittled them, gotten into a fist-fight with them, or slept with their wives, the “morality” of this situation would have been much different.

But passing on a few beers has no morality. You should give “zero f–ks” about this situation. 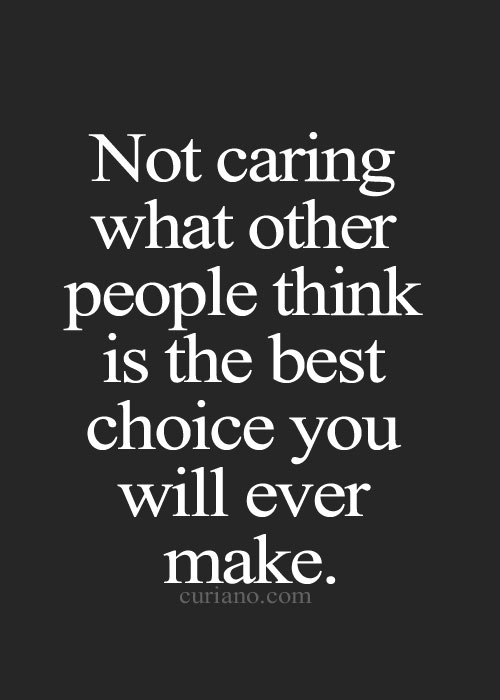 How To Give Zero F–ks

The key to being able to give “zero f–ks” is clear, simple, and straight forward.

Ask yourself if there is morality in the decision you are trying to make.

Often times, you will realize you are assigning a moral compass to items which don’t have one.

These items have no “right” or “wrong”. They are just decisions – nothing else.

A buddy of mine was infamous for passing on social outings. He would always use the same excuse:

That was it. No frills, no fluff, no made up stories about cousins coming in from out of town or great grandmothers’ birthday parties.

Our entire social circle knew that “I have plans” meant he didn’t want to go out. One time, I asked him about his popular response.

Hey, man, why do you always say you have plans?

We all know you just don’t want to go out.

His response was great:

I do have plans. I plan to sit on my couch in a pair of sweatpants.

If you’re looking to improve yourself, you’re going to need to be able to say no to others.

You’ll be forced to put yourself into difficult situations.

You’ll have to care less about what others think – and begin to give “no f–ks”.

A step in the right direction is to ask yourself if there is actually morality in the decision you’re making.

Because if there isn’t, there’s no reason at all to feel any emotion whatsoever.

Yours in true health,
Jason