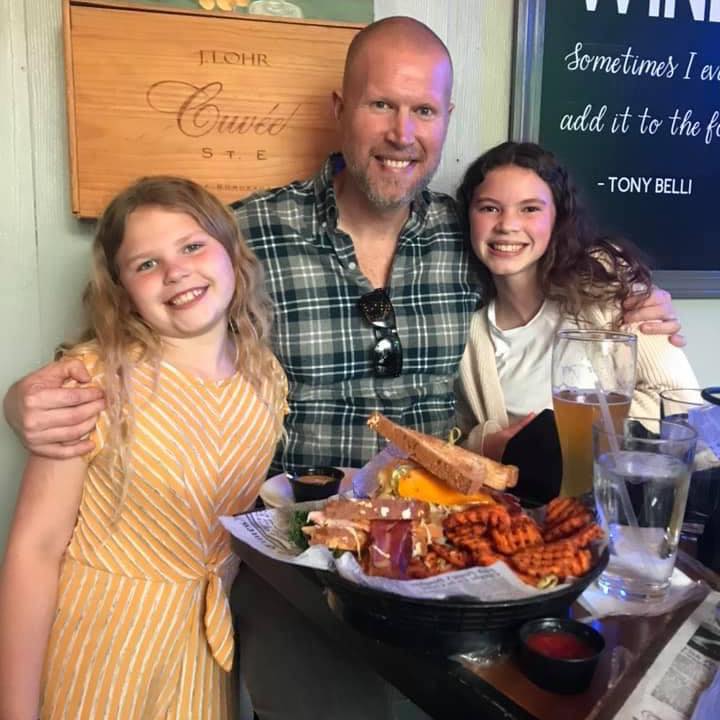 In a former life, I was just coasting through the motions. I was an overweight, 300 pound middle school teacher who was unhappy with his physical appearance.

I’d like to tell you the short story of how everything changed for me – and how Anyman Fitness was founded.

The Worst Feeling In The Universe Is The Feeling That You Have Lost Hope.

Without hope, we fall quickly into traps that are nearly impossible to get out of.

I know exactly what it feels like to have lost hope.

Once upon a time, as a high school senior, I was on top of the world:

Cocky and brash, as only an 18 year old could be, I was destined for greatness (in my own mind, of course).

I set off for college, wet behind the ears, and I was full of hope, ready to be someone my parents could be proud of.

When I started my college career, I weighed 215 pounds. I had always been athletic, and in high school, my afternoons and evenings were filled with practices and games, which kept me lean without needing to watch my diet.

With my college afternoons and evenings now filled with study sessions, take out pizza, and alcohol, the pounds quickly crept up on me.

But I had convinced myself that this was “normal”. After all, what high school student doesn’t put on weight during college? Isn’t that what the “Freshman 15” was all about?

Upon graduation, I had ballooned all the way up to 255 pounds:

But in all honesty, I didn’t really give much thought to my ever expanding waistline.

I had just started “The Real World”, and life had become much, much busier as a result.

I was a brand new, 6th grade teacher, and my evenings were now filled with lesson plans, grading papers, and reteaching myself linear equations and the Pythagorean Theorem.

I was enjoying my new career, yes, but at the same time, I just felt like I wasn’t truly living up to my own potential.

Life was getting more difficult physically. I found myself exhausted from simply standing in front of a classroom and talking.

My neck hurt, my back ached, and I got headaches frequently. I had chronic asthma, and I popped antacids like they were candy each morning to keep the heartburn away.

And My Weight Continued To Creep Upwards.

Shortly after my first daughter was born, a picture was taken of me that made me do a double-take:

After I saw this picture, I sat down and my heart sank.

How did a strapping, 215 pound high school senior allow himself to balloon up to nearly 300 pounds?

How did I let myself go so badly?

How did I let hope disappear, and have such a bloated, unhealthy physique to show for it?

And Perhaps Most Importantly,
How Do I Fix It?

I decided at that point to make eating right and working out a priority. I just HAD to get this weight off of me. At 300 pounds, I was a heart attack waiting to happen. I didn’t want to have Type 2 Diabetes.

I had a brand new, one-year old daughter, and another daughter on the way. I knew I had to walk them down the aisle one day – and that was a responsibility I took very seriously.

With my newfound resolve, into the gym I went.

I felt like a total noob (which I was), but I was determined to make it work.

For months, I went into that gym religiously, 3 times per week and lifted weights for 90 minutes per session.

No big deal, I thought to myself, I’ll just add in cardio. Everyone knows that cardio is the path to fat loss.

I added a grueling cardio regimen on top of my strength training routine. Every day, I would spend an hour on the treadmill or the elliptical, and push myself as hard as I possibly could.

On top of that, I would eat healthy. I would eat itty, bitty, small meals multiple times each day in order to raise my metabolism.

I would only eat “clean” foods, and I would restrict my diet and deprive myself of the foods I loved.

After well over a year of doing this, I had almost zero results (sorry for the blurriness):

After I saw this picture, taken almost a year after the previous picture was taken, I compared the two photos.

Did I look “better”? Maybe. Minimally, at best.

I weighed about 10 less pounds, so it was something.

But it really wasn’t much.

The amount of effort I was putting into my gym sessions was absolutely enormous. I was nearly killing myself, doing cardio for over 7 hours each week, and lifting weights for another 4-5 hours each week as well.

I was barely eating; I was starving myself, really.

I was constantly hungry, my energy levels were shot, and I didn’t know how much more of this I could take.

And the worst part… I was losing hope that being lean and fit was a possibility for me.

The next time I hit the gym, I looked around at my fellow gym goers.

I closely examined their physiques, and I realized something.

Nearly all of them were leaner than me.

Nearly all of them had more muscle than me.

Nearly all of them were fitter than me.

And here’s the part that crushed me… I knew I worked out much harder than they did!

So, What Was I Doing Wrong?!

Why did they get 10x the results and put in a fraction of the work I was putting in?

Somewhere, I was messing up.

So, I did what any good teacher would do… I began to study.

I turned to the internet and began to research.

But I skipped over all the “in your face, clickbait” articles.

You see, I had gone that route before.

I had read all the “Top 10 Foods That Make You Fat” type articles.

I had absorbed all the “5 Superfoods To Flatten Your Belly” lists.

I had seen all the “7 Exercises To Give You A Flat Stomach” suggestions.

And they had done absolutely nothing for me.

Instead, I started asking myself the real questions:

And perhaps most importantly:

What I Discovered Was Truly Remarkable…

It turns out, most people who have amazing transformations don’t exercise every day.

They do exercise, of course, but they stick to the exercises that will give them the most bang for their buck, and they’re also sure to take multiple days off each week in order to recover and rest.

I also discovered that most successful dieters didn’t restrict their choices or have a laundry list of “do not eat” foods.

In fact, if they were in a social situation, they often ate the goodies and tasty treats that the rest of the party was eating!

They even had alcohol on occasion, which totally blew my mind.

I started to use the strategies of all the success stories I had read.

I began to apply the takeaways from the studies and research papers I had consumed.

I was a human guinea pig.

And the results were mind-boggling

Not only was I blown away that this was possible, but my friends were blown away as well.

After all, the “Jason” they knew weighed 300 pounds and could barely walk up a flight of stairs without being short of breath.

And now, all of a sudden, I was 80 pounds lighter, with more muscle than ever before.

They were begging me for The Secret.

Do you work out 3 hours per day?

Do you kill yourself with cardio?

Nah, actually, I don’t do any cardio.

Do you eat only chicken and broccoli for every meal?

Did you stop drinking alcohol?

Not at all; in fact, I usually drink in moderation 1-2 nights per week.

Well, you know… the answer to that question ran a little bit deeper than they thought…

I mean, take a look at these two pictures:

The guy on the left did cardio for 7+ hours and lifted weights for 5 hours each week, nearly starved himself to death, and barely made any progress.

The guy on the right worked out for 3 hours per week total, didn’t restrict any foods whatsoever, and ended up with a full 8-pack.

I couldn’t just tell my friends, “Here’s The One Secret”, because the fact was, there wasn’t just One Secret.

I had developed an entire fitness system.

There were frameworks for nutrition, for training, for mindset… and for tackling all the problems life will throw your way.

But I knew one thing.

I KNEW I Had To Get My System
Into The Hands Of People Who Needed It.

So, I applied for a business license and purchased a website domain… and Anyman Fitness was born.

At first, all I wanted to do was tell my story.

And to teach my lessons to those who were in need.

I found it fun and invigorating… I knew there were countless others out there, who were in my shoes, and had lost all hope.

I wanted to help them.

And I wanted to show them that with the right approach and mindset, they could do it, too.

I began to get emails from people begging me to coach them through my system.

After they got similar, spectacular results, the referrals started pouring in.

I kept at it, kept coaching others, kept helping people, and kept true to my promise – to show them how to “do fitness” the right way.

With no scams, no gimmicks, no supplements, and no empty promises.

Eventually, I had to leave my career as a teacher, as business exploded exponentially.

This was refreshing for so many people.

FINALLY, there was someone who would shoot it to you straight, and not give you a laundry list of “do not eat” foods and order you to do 1,000 burpees per day.

Not to mention the eye-popping results….

To date, I have helped over 7,000 clients and 10’s of thousands of others lose fat, gain muscle, improve their lives, and perhaps most importantly, regain hope.

My writings and teachings have been in many high profile publications, such as:

Today, my hope is completely restored.

And each day, more and more people jump onto Our Team, and begin the Journey of restoring their hope as well.

Could you be next?

Only You Can Make That Choice

After all, this is the internet.

Why would you ever trust a guy like me?  😉

I understand that, and that’s a common roadblock we all face.

We don’t know who to trust, and who to believe.

Should you trust the click-bait Keto guy you saw on your Facebook feed?

Or would you rather trust someone who has gone through exactly what you’ve gone through, and has helped thousands of others do the same?

To see our eye-popping transformations and take the first step towards improving your life, check out what we can offer you here.