We are so used to the idea of “more is better”.  Regardless of the diminishing rate of returns many “favorable” actions provide us, we sometimes simply can’t help ourselves.

Kari fell into this category.

She contacted me early in 2014, frustrated with her lack of fitness progress and a damning diagnosis from her doctor – adrenal failure – which was wreaking havoc on her energy levels and as a result, her weight and body composition.

After the preliminary disclaimers were made (repeat after me, I am NOT a doctor……..), and we agreed to work together, Kari began to tell me a bit about what led her to her current state.

Her story was intriguing, but not all too uncommon.  A very low caloric intake.  INSANE amounts of cardio.  Dismal protein consumption.  At one point, Kari confided in me she was doing 1-2 hours of cardio ON TOP of Insanity – daily – while maintaining an almost vegan diet.  Her claim at one point was less than 1,000 calories per day.

While this certainly caused my eyebrows to raise a bit, and made me a bit skeptical as to the accuracy of this (she DID have her logs from My Fitness Pal……..), in certain conditions, the “calories in vs. calories out” law of thermodynamics tends to be tossed out the window.  This isn’t the first time I had witnessed this sort of a phenomenon.

And I’m no doctor, but I can’t help but assume the large stressors placed on the body are causing hormonal issues.  Any fitness coach can tell you elevated stress levels can cause the body to do some crazy things……………..

If Kari’s numbers were accurate, she was eating about half of her daily maintenance, with very large amounts of activity on top of it.  And gaining weight.  It really made no sense whatsoever.

Kari needed some correcting.  Both physically and psychologically.  She was going to need to reprogram her mind and her body.  And her spirit as well.  Needless to say, she wasn’t very happy with herself – and she needed some help.

We set foot on a very moderate plan, all the way around.  Upped the protein and the starchy carbs.  Threw in some tasty fats on rest days.  Settled on a low frequency, low volume, high intensity strength training program.  And we highly advised against additional activity.

Sometimes clients love cardio……….and we don’t mind if they continue their regimens.  But in this case, Kari needed to rest.  And let her body recover.  And begin to correct the wrongs which had caused so much damage to this point.

And off we went.

I’d be lying if I said it was smooth sailing from Day One.

At first, Kari wanted to keep part of her cardio regimen in tact.  She promised to scale it back to brisk walking, but couldn’t allow herself to give it up completely.

We made progress at the checkpoints.  Nothing shocking.  Nothing amazing.  Just simple, slow, steady progress.

Eventually, Kari was convinced to ditch the scale.  The scale was yet another piece that was stressing her out.  And we wanted to get rid of anything that wasn’t directly contributing to her success.

We kept working with each other after 12 weeks had passed.  Slowly, Kari got stronger.  Much, much stronger.

She become more consistent with her diet.  She began to incorporate different and varied foods.  She lost her fear of dietary fat.  She ditched the cardio route completely.

And then randomly, one day, it happened.

It happens to everyone eventually.  Everyone who sticks with it, that is.

I call it a “fitness nirvana”.  It’s the moment it all becomes clear.  It’s a damn-near religious experience for many.

At some point, if you continue to push, and persevere, and try…………it will all of a sudden become quite obvious – that you’re gonna “win”.  It might take a few weeks, or months, or even years, but you WILL win.  And when it happens?  You’re absolutely elated.

Kari had her fitness nirvana.

I received an email from her.  Paraphrased, it read like this:

It’s like a weight has been lifted off my shoulders!  Weight and inches are FLYING off of me!  I feel more confident, I feel stronger, I feel amazing.

This self-realization occurred around 6 months after starting.  It didn’t happen in Week One.  Or Week Twelve.  Or even Week Twenty.

But it happened.  It happened to Kari.  And it can happen to you, too.

In ten months, Kari has become as strong as an ox.  With a squat and deadlift easily in the 200+ pounds range, she outlifts nearly every female in her gym.

Her concerns about strength training not being optimal for shedding fat have been eradicated.  Her figure has improved immensely.  Her confidence levels are sky-high.  She no longer hides her body underneath layers of baggy clothes.

But the most impressive piece?  It isn’t physical.  It’s the mental change that occurs with nearly a year of consistent progress and dedication.

True health isn’t a “quick fix”.  It isn’t found in a “detox cleanse”.  It isn’t obtained through ungodly amounts of activity.

It takes ups and downs.  Trials and tribulations.  Mistakes.  Hills and valleys.

But in the hard work, the pleasure is found.  In the journey, it all becomes clear.

Kari’s adrenals are just fine.  As is the rest of her.  And while her progress has been nothing short of remarkable, this is truly just a start.  As cheesy as that sounds, Kari is just beginning.

And we are so proud that we have been a part of her journey with her.

Kari, before and after: 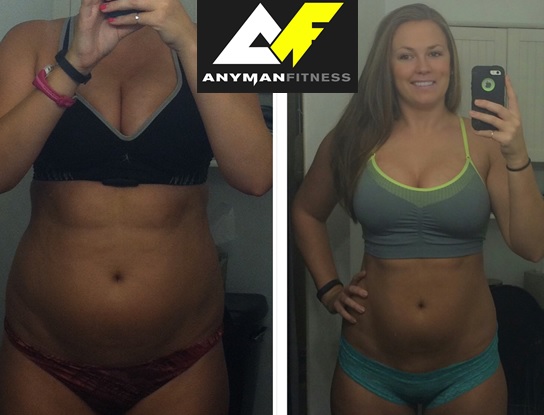 If Kari’s approach to fitness and life sounds interesting and intriguing, be sure to visit our client inquiries page.