The fitness industry loves to sell you on the idea of an unattainable goal.

Whether you’re talking about glossy 6-pack ab shots, fake before and after pictures, or photoshopped-to-death glamour pics, there’s an excellent chance that you won’t be able to look like the image you have in your mind.

This is one of the problems with fitness. We see an ideal and we think we are less of a person if we can’t accomplish this ideal.

Never mind the fact that the images you see are often flat-out fake. Even before the “fake” person took the image, they likely had to practically starve themselves to get into that condition. 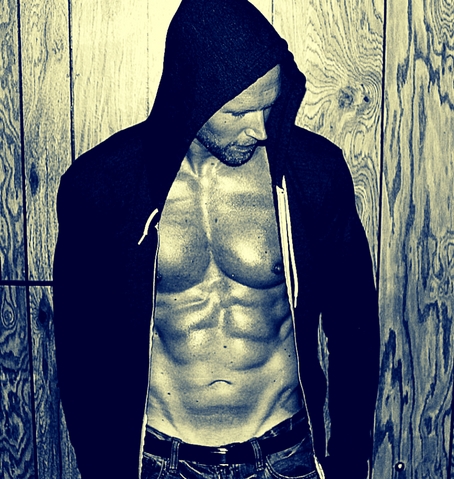 The above picture is a great example. There is no Photoshop here, but there are quite a few other tricks that had to be used.

I actually looked like this 8 months prior, after my fall bulk: 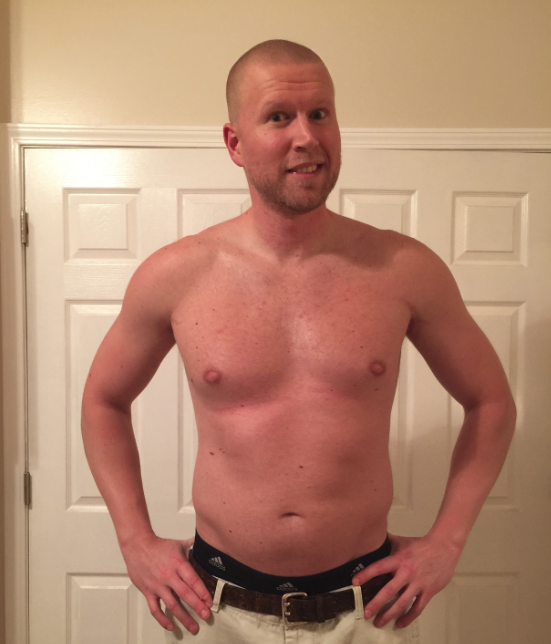 But thus is the life of a fitness professional. I’m not complaining – being able to train for a living, and help others do the same, is rewarding, fulfilling, and frankly, a dream come true for me.

At the same time, to tell you that I look like the hooded sweatshirt, glossy fitness picture all the time would be false advertising. It’s not like I walk around the streets of my town looking like that, either. 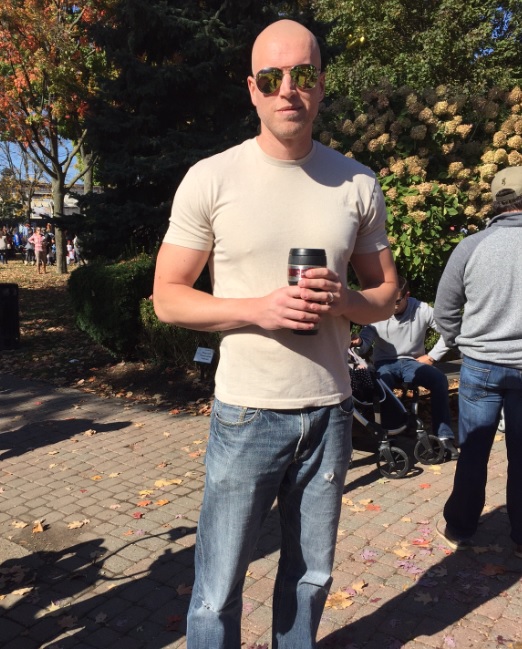 This is the real me. Much less exciting.

I’ve been able to build a substantial amount of muscle over the years due to my obsession with fitness. I’m not entirely sure how that obsession started. Somewhere along the lines, I fell in love with the idea of training, dieting, and committing myself to physical fitness.

There’s a great chance that you aren’t “obsessed” with fitness in the same way that I am.

Realistically, you probably don’t want to spend 6-7 hours per week in the gym over the years in order to look a certain way.

Most people aren’t afforded the opportunity to train and eat in this fashion. I have had a few lifestyle advantages that have allowed me to be as consistent as I have.

The first advantage is the fact that my first career is that of a teacher. Most days, when the final bell rang at 3 pm, my day was over (other than paper grading and lesson planning). My young children were also at day care during this time, which didn’t close until 6 pm. This gave me a nice, 3-hour window in which I could train uninterrupted.

The second advantage was also related to my career. Teachers have notoriously short lunch periods. Although it was possible to go out and grab food, it took much more planning than most office jobs. I only had 40 minutes to leave, get food, eat, and get back by the time I had to teach my next class. It was far easier to simply pack my lunch and eat it in my classroom.

Since I was practically forced to pack my lunch each day, it was simple to stay on point, diet wise. There were no “office politics” at play when it came to eating out, as most of my co-workers packed their lunch, same as me.

While you may not have these same, built in advantages to your daily schedule, it IS possible for you to improve your health for the better.

You don’t have to train 5 days per week for years on end in order to reap the benefits of healthy living.

Here is a much more realistic picture of what you can do with a minimal amount of effort: 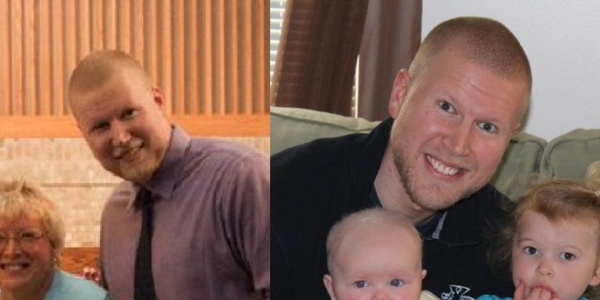 The picture you see on the left was taken in 2010, at my daughter Brooklyn’s baptism. At the time, I weighed around 275 pounds. I went to the gym sporadically, and didn’t actively attempt to diet at all. Shortly after this picture was taken, I began to look at my diet more carefully and became more consistent with my training.

The reason I am showing you these two pictures is to highlight how little effort it actually took to go from the me on the left to the me on the right.

I was more consistent with my training, yes, but my training only took about 45 minutes, 3 times per week. I only did 6-8 sets at each workout session.

I changed my diet as well over that time, but I did not count macronutrients at all. I made a few, simple habit changes that, when coupled with the training, effortlessly allowed me to lose 35 pounds in the process.

As far as health benefits go, I felt drastically different 35 pounds lighter. I no longer suffered from migraine headaches, asthma, acid reflux, and low energy. My blood work improved greatly, and my blood pressure returned to a normal level. My blood sugar level stabilized and I felt fantastic.

You will have to make some basic changes to your daily routine, and focus your attention on the big picture, however.

Here are some helpful tips you can use today to begin on your path to a healthier version of yourself.

From a pure time investment lens, your diet has a much bigger impact on your body weight than exercise does.

It takes an enormous amount of time and energy in order to lose a pound of fat through activity.

It takes a small amount of time and energy to lose a pound of fat through your diet. You may have to deal with some hunger, but you won’t have to deal with logging an insane number of hours on the treadmill if you don’t want to.

Start with the basics. Eat protein at every meal. Stay away from excess butters, oils, and creamy dressings. Eliminate snacking. Don’t drink your calories. Make nearly all of your meals at home. Say “no” to your co-workers when they ask you to go out to lunch. Save alcohol for 1 or 2 nights per week, max, and make better choices (red wine and unflavored liquors contain far fewer calories than beer).

Make real, filling, wholesome meals that you enjoy. Eat until you’re satisfied, but not overly stuffed.

And for Pete’s sake, eat your veggies like your Mom told you to.

The advice that you must eat often in order to “stoke the metabolic fire” is a myth, plain and simple.

You will not go into “starvation mode” by eating 2 or 3 meals per day.

Eating 3 square meals per day is an excellent start. If you wish to eat even larger meals, perhaps give intermittent fasting a try, and skip breakfast.

Being able to eat larger, more filling meals will give you a psychological edge when dieting. You will find it easier to make it from meal to meal if you know you’ll be able to eat a good amount of food once meal time is here.

There is no need to become a culinary artist in order to lose fat and feel great.

Some of your best weapons in the battle of the bulge are simple to make, tasty breakfasts, lunches, and dinners.

Here are a few examples of some quick, simple meals that will taste great with minimal effort to make them:

None of these meals will require much (if any) prep work to make them. They will fill you up, provide you with energy, and they will likely allow you to lose weight as a result.

When you do finally decide to get your feet wet and start hitting up the gym more regularly, make sure you are exercising in a way which aligns with your goals.

Also, when you lose fat, if you’re not resistance training, you will lose muscle along with it. This is why those who are chronic yo-yo dieters usually end up gaining back more than they lost. They lose fat, but they lose muscle as well. Since muscle burns calories naturally, this is a serious problem. After the diet is over, they have less muscle mass than before. When they return to their normal eating habits, the fat comes piling back on at a greater rate than ever before.

Embrace the barbell, the dumbbells, and even the machines. They are your best friends to promote long term health and longevity.

Once you’ve found your way into the weight room, make sure you’re selecting exercises which provide the best return for your time investment.

Compound movements, or movements which involve 2 joints, are far more effective at building muscle and burning fat than isolation movements, which only involve 1 joint.

When I was in the process of losing the first 10% of my body weight, my routines were short and sweet.

That was it – the entire workout took less than an hour. It often took only 35-40 minutes. I skipped the curls, the tricep extensions, the calf raises, and any other isolation movement.

Executing these 5, simple habits will easily start you on the path to looking and feeling better.

If you do implement these small changes into your daily routine, you will be amazed at how easy healthy living can be.

You don’t have to be a macro-obsessed fitness professional.

You don’t have to train for an insane number of hours.

You don’t have to eat nothing but rabbit food and tofu.

You will have to change a few things and start to master the “big rocks”.

But mastering those “big rocks” may just be all you need to start to make positive changes in your own life.