‘Cause we need to get you in the gym you see,

‘Cuz without YOU the gym feels so empty.

Happy Friday, Coach J here from Anyman Fitness – and welcome to the latest edition of The N.W.A. Newsletter.

Each Friday’s N.W.A. Newsletter will have 3 parts:

I will also give you my single favorite piece of social media content from AF over the past week and link to it on either Instagram or Twitter.

Without any further ado… let’s get started, shall we?

N.W.A. Nutrition Tip Of The Week

In the early 2000’s, sugar became the latest nutritional boogeyman.

Prior to that, it was saturated fat – remember the Time magazine photo titled “is fat the new smoking”?

The one that had bacon and eggs in an ashtray?

Well, it turns out they were wrong.

Saturated fat WASN’T what was causing obesity, and scientists had a new boogeyman: SUGAR!

All we needed to do was hit the brakes on the sugar and carbs, ramp up the dietary fat, and we’d be good to go.

Is that what actually happened though? 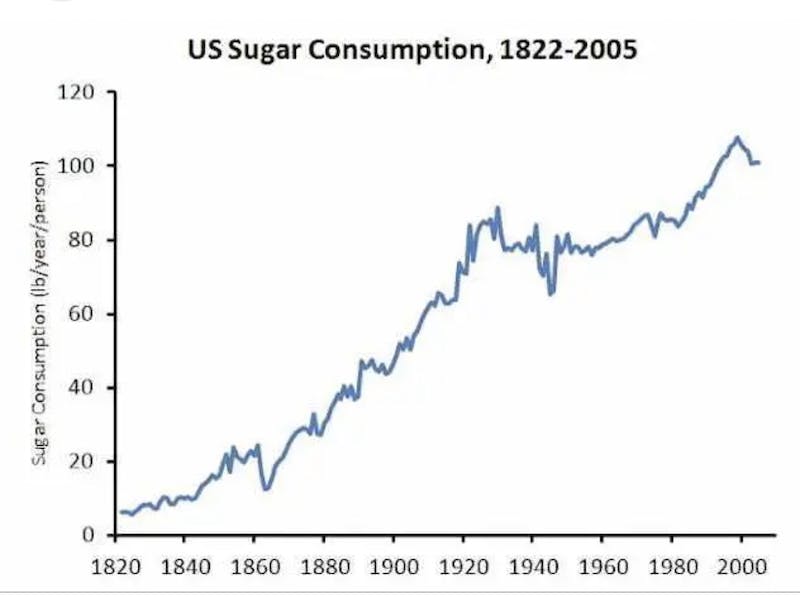 Our sugar consumption has skyrocketed over the last 180 years or so, along with our obesity rates.

Look closely at that graph… do you notice anything?

I saw it immediately – what about the last 20 years?

Sugar intake has plummeted in the last 20 years with all the anti-sugar hysteria.

And yet obesity rates continue to climb…

In response to the above graph, I posted one of my own: 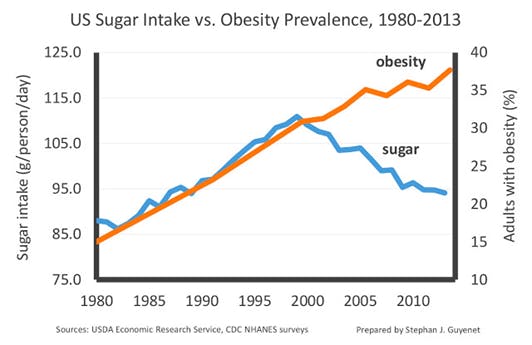 As you can see, in the year 2000 (the year the first graph stopped showing data), our sugar consumption took a sharp nosedive.

We’re eating roughly the amount of sugar we were in 1990, and yet we’re still losing the war on obesity.

Granted, we should still be eating MUCH less than 95 grams of sugar per day on average (and the data is missing from 2013 – present day).

The graph I found certain doesn’t “prove” we should be eating sugar.

But the first graph doesn’t prove sugar is the case of obesity, either.

Again, far from it.

We can argue about low carb vs high carb.

Sugar vs seed oils vs GMO’s vs saturated fat.

There’s always going to be nutritional arguments and everyone has their spin.

But I’ll just tell you this… I’ve never seen a person diligently track and control their calories (and macronutrients) and not lose body fat quickly and effectively.

But I HAVE seen people who eat zero sugar, zero seed oils, etc who are frustrated by their lack of progress.

Oh yeah… I see that ALL the time…

Let’s just keep the takeaway from this one nice and simple:

Meat, fruits, veggies, oats, rice, potatoes – you know, the things without labels on them.

And if you end up frustrated, start tracking your nutrition.

It’s eye opening; everyone should track their nutrition for at least 90 days at some point in their lives.

N.W.A. Fitness Tip Of The Week

It’s common for beginners to hit the gym and try out a new exercise, and find they don’t “feel” the exercise in the right places.

After a bench press session, you should feel a tightness in your chest and pecs.

If you haven’t bench pressed in awhile, you’ll likely also feel a bit of soreness.

This makes sense – this is what we’re used to, so when we don’t feel a bit of soreness, we start to wonder if we’re doing something wrong.

Sometimes the answer is no, you’re not doing anything wrong.

But then again, sometimes the answer is yes.

It’s tough to tell exactly what’s going on, but I have a simple solution for you:

Slow down your reps.

Unless you have aspirations of being a powerlifter, your goal is never to “move an object through space”.

Your goal is to use the weight as a tool to create an adaptive response.

With the proper stimulus, you will get stronger, and build muscle appropriately.

While some powerlifters are certainly “jacked”, there’s plenty of them with underdeveloped physiques.

This is because the goal of a powerlifter IS to “move an object through space” – that’s all they’re trying to do.

Get the weight from Point A to Point B as efficiently as possible.

If you’re jerking the weight around and not controlling it throughout the entire range of motion, often times, the stimulus isn’t in the proper spot.

Take that bench press for example…

With a proper bench press, your shoulder blades are pinned behind you as you lift (pretend someone put a finger between your blades and you’re trying to pinch the finger – that’s what you want your shoulders to be like during a bench press).

You want the bar coming down right to your nipple level, or slightly below.

You want your reps to be slow – maintain tension during the entire eccentric (lowering) portion of the lift (do not just “drop” the weight to your chest).

You tap your chest, and you explode up.

In our Chad Dad Blueprint course, we’re using a 2-1-1 tempo at all times.

A “2-1-1” tempo means a 2 second eccentric/lowering, a 1 second pause at the bottom, and a 1 second concentric/raising of the weight.

Using bench as an example:

This simple change has many of those taking the course reducing the weight and checking their ego.

Ego lifting happens to everyone – nobody wants to be the guy (or gal) lifting the “light weight” at the gym.

But just remember – NOBODY cares outside of the gym.

You lift weights to improve your life after you leave the gym – not while you’re in it.

You’ll get stronger, build more muscle, and have better results if you slow your reps down.

And you’ll likely start “feeling” the muscle better, too, which is super important.

N.W.A. Mindset Tip Of The Week

When you see a killer transformation online, that’s an “event”.

When you hear about a start up that was acquired for millions, that’s an “event”.

When you read an article about a couple who lived frugally and saved 50% of their income to retire at 45, that’s an “event”.

We all love events – myself included.

They’re fun, and a great way to celebrate the accomplishments of others.

But they truly don’t tell the entire story…

Have you ever seen an “event” and thought, “Man, how come that can’t happen to me?”

Or maybe you thought the person who had the event is “lucky” or “genetically gifted”.

And perhaps there’s some truth to those thoughts.

But there’s an even bigger aspect to it that you’re missing – the “process”.

If you want to achieve awesome things, it’s nearly impossible to skip the process.

I’ve seen some incredible transformations from Anyman Fitness clients throughout my career.

I’ve seen people lose 70+ pounds and get into the best shape of their lives (many, many times).

And of course, I’ll post those pictures online so people can see the awesome things our clients accomplish.

But the “event” is just the tip of the iceberg.

What you’re not seeing is the 7 months (or longer) they struggled to maintain consistency.

You don’t see all the times they said no to Happy Hour or dessert.

You don’t see the times they decided to wake up at 5 am and get a workout in instead of sleeping until 7.

All you see is the before and after picture…

I recently came to the end of a LONG and arduous project – I had a custom designed app created for our Full Access: Anyman Fitness clients.

This was far and away the biggest project I’ve ever had in my career.

Our community had outgrown the pdf’s, spreadsheets, and third party lifting apps, and we needed to move into the 21st century.

The project began in February of 2021, and it was completed in November of 2022 – we were recently approved for both the Android and the Apple App Stores.

I posted about it on social media and received a lot of congratulations comments, which felt good.

Our app already had over 50 5-Star Reviews in the Apple Store (and 5 in the Android Store), which is a great start.

Weekly meetings, discovery sessions, more bugs than you could ever imagine, an “MVP launch” that didn’t exactly go smoothly (and I had Covid during the launch as well, which was super fun…).

19 months of hard work just to get it to market.

Seeing it in the App Store is super satisfying, though, I won’t lie.

And I’m excited to see where we go in the future as a company.

Fun Fact: When I first got the bid for the project, and I saw the price for the app, I had a severe case of sticker shock.

I mulled it over for a few days, until I realized something.

I told my wife, “Honey, I HAVE to do this”, and she asked me why that was.

And I told her “Because if I don’t, I’ll regret it, and I don’t want to have any regrets when I’m through with my career.”

If your life continues in its current trajectory, what will YOU regret years from now?

If something immediately pops into your head, that’s a sign.

Be it your fitness, your career, or your relationships – you can’t ever ignore the process.

Whatever YOU want to build, it’s time to get to it, pronto.

I need these coasters…

I hope you enjoyed this edition of the Anyman Fitness N.W.A. Newsletter.

I’ll be back next week.

Hope you have a wonderful weekend.

Copyright © 2023. Anyman Fitness, LLC is not in any way associated or affiliated with, approved by, or sponsored by Anytime Fitness
Designed with ♥️ by Aesthetic Pixels