As a child, I was a pushover.

I didn’t know how to stand up for myself.

I have vivid memories of being bullied and pushed around, and not having the self-confidence to stand up for myself.

Once, as a 7-year old, a neighorhood friend hit me and I ran home crying. When I reached the front door, my Dad was standing there. He asked me:

What are you crying for?

After I told him, Dad gave me the proper response:

Stop crying about it and go hit him back.

I stood up out of the lawnchair I was in and begin to timidly walk towards the boy. I had no clue what I was going to do once I reached him, and I remember thinking that approaching the kid was a bad idea.

After I got close, I didn’t say a word, I clumsily sort of half-swung at him (without any authority whatsoever). The lame attempt at a punch missed, and the boy pushed me as I was off-balance, sending me head-first into a lamp pole.

Bleeding and crying harder than ever, I ran back home.

“GREAT ADVICE, DAD!” I bellowed as I made a bee-line for my bedroom.

I’m sure my Dad thought I was a massive pussy. Shit, even writing about this episode stings – memories of being such a “softie” plague me and eat away incessantly at my current masculinity.

This sort of a situation was commonplace for me as an adolescent. 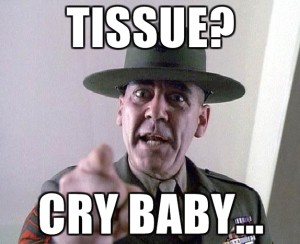 I once fell off my bike and a friend carried me home in his arms because I wouldn’t stop crying.

I cried every single day I attended daycare as a child – so much so that my parents asked me repeatedly if I was being abused.

When I played football in 5th grade, the waterworks were a regular sight for my teammates.

It’s safe to say that as a young child, I hadn’t developed the appropriate coping mechanism to deal with failures.

Until one memorable day, when my trigger-crying response just didn’t fit the bill any longer.

And everything changed for me.

Even though I will readily admit I was soft as a kid, I was still a talented athlete.

I could always throw a baseball harder than anyone else on the team, and my height alone gave me natural basketball ability.

As a freshman, I played on the junior varsity basketball team, and I practiced with the varsity players.

I had an inferiority complex, however. I was 6’8″ at the time, and every bit as talented as any of the 18-year olds on the team.

But a 14-year old thinks of nothing but the 3-year age difference, and assumes he isn’t qualified – and therefore, he doesn’t belong.

The older players on the team sensed weakness, so in the name of “hazing” subjected many of us to the ordinary locker room hi-jinx. Wedgies, icy hot in the whitey tighties, hiding your clothes after showers – that sort of thing.

Frustration of being figuratively “shit on” by the older players bubbled one day as we were running fast break drills at practice. As I went up for a layup, I got an elbow right in the snout. Blood shot out of my nose and I stumbled to the sidelines, seeing stars the entire way.

As the trainer attended to me and cleaned me up, a funny thing happened, though.

Instead, a slow, rhythmic, almost rhinoceros-like breathing pattern emerged, and I lowered my head and glared at the player who had sent me reeling.

I felt a prickly-surge through my temples and nostrils, and I felt almost drunk with intensity. My body was in full-bore “fight or flight” mode, and for one of the very first times in my life, “flight” wasn’t going to be the option I would choose.

I got back up on my feet, breathing quick, short breaths through my mouth, gritting my teeth and trying not to explode with fury.

I went back into practice, and on the next play, I found myself on a fast break receiving a pass on the left wing with the defender (the same defender who had elbowed me in the nose) coming from the right to meet me at the basket.

I remember the play like it was yesterday – two quick, assertive dribbles combined with about 3 steps, and I jumped off my left foot.

The defender did his best to elevate, but the absolute RUSH of adrenaline which had taken over gave me an extra 6″ on my vertical leap in that instant.

The poor soul never had a chance – a monstrous, two-handed dunk commenced right on his head. He fell backwards from my momentum, and I landed over the top of him, glaring at him – and I let out a primal yell.

The entire practice stopped, and all the players had to collect themselves after witnessing the play.

To this day, as I recall this story, my pulse is rising and my pupils are dilating.

I will never forget the day – and the moment I learned what it meant to channel your feelings of inadequacy into feelings of anger.

And in the process, I learned how to take those feelings of anger and use them to sharpen your proverbial sword.

Your failures aren’t a reflection of your self-worth.

As a child, I had many successes. But I also had many failures.

My first instinct was to tie those many failures to who I was as a person – and this was a poor way of looking at myself.

If a player blocked my shot on the basketball court, he was a better player than I was.

It wasn’t that the shot was a poor selection, I used poor footwork was setting up the shot, or I was being double-teamed.

He was better than me. At least that’s what I always assumed in my head.

And whether it was sports or school related, I didn’t understand that our failures were what helped to make us stronger.

Confidence was a fleeting bitch for me. Once I was rattled, it was game-over. In all aspects of my life.

There’s a time and a place for being “touchy-feely” with yourself if you’re struggling with something personally.

If you mess up when dieting, you should forget it quickly and turn the page.

If you miss a training session, you should pick it back up and pretend like it never happened.

When you look at yourself in the mirror, you should be proud of what you see, and approve of the reflection staring back at you.

At the exact same time, do understand this fact:

Sometimes, it’s okay – AND HELPFUL – to get pissed off at yourself for accepting mediocrity.

The next time you mess up, instead of feeling guilty about it, or trying to “forget it” as quickly as possible, try something new for a change.

Allow yourself to feel angry at yourself for messing up on your plan.

When you talk to yourself, be harsh on yourself, but in a positive manner.

Stop being so soft and weak.

It’s a diet – A GODDAMNED DIET – it’s not supposed to be a breeze.

You’ve got every advantage in the world – stop bitching because you have too much food at your disposal.

How do you ever expect to accomplish your goals if you can’t accept a bit of hunger as part of the process?

If you want to be a champion, start acting like it, and stop crying about it.

Allow your feelings and emotions to guide your path.

Instead of making a poor cop-out excuse (Dad Bods, anyone?), get pissed off at yourself and channel it into something positive.

Fitness isn’t SUPPOSED to be peaches and cream all the time.

A set of heavy squats is supposed to feel like a burden – and that’s because it is, in fact, a burden.

A diet is supposed to make you feel a bit hungry – and that’s because you are, in fact, eating less than you require for maintenance.

A workout is supposed to make you spent and tired – and that’s because its purpose is to stimulate structural changes in your body.

A glimpse of yourself is supposed to inspire the desire for changes – and that’s because if you’re not improving yourself, then you’re likely regressing.

Feeling negative emotions and disappointment with yourself is difficult.

You want to try to sugar-coat your reality and make excuses.

You’ll find yourself saying anything to placate your true, genuine feelings.

Start looking at yourself with honest and open eyes.

Start seeing your shortcomings as opportunities for growth.

Start using your anger and your emotion for positive changes instead of basking in negative thought patterns.

Sometimes the most difficult and painful tasks in life are the tasks which provide us with the most meaningful changes.