During the Christmas season, 2004, I was in the worst shape of my life.

I had graduated from college 8 months prior and had started my career as a 6th grade teacher.

I was excited to be a part of the “working class”. I got a strange kick out of waking up in the morning, working my 8 hours, and driving home to spend time with my fiance in our first “real” apartment. (You know what I mean – it was the first apartment either of us lived in which didn’t have 40-ounce beer bottles as decorations.)

Considering it was our first time preparing meals for ourselves on a regular basis, our skills in the kitchen were non existent.

It didn’t take long for the pounds to pile on.

I no longer had classes to walk to, papers and projects to complete at night, and the stress of the university to keep me busy.

I actually found myself with more time on my hands than I did during my senior year. I went from working retail 20 hours per week and student teaching 40 hours per week to just working my normal job.

So, what did I do when faced with the extra time?

Which often meant having a bag of chips by my side as I watched television.

I had graduated weighing about 250 pounds. By Christmas, I had no clue what I weighed, as we didn’t own a scale, but I knew it wasn’t good.

The final straw came when I received a package in the mail. My grandma had sent me a pair of khakis via Fed Ex as a Christmas gift.

I opened them up and tried them on. Grandma had gotten my waist measurement from my Mom.

They barely buttoned up – and they were a 42″ waist.

I lifted my shirt and looked at my muffin top pouring over the belt line.

“Hey, honey,” I said to Kate, “You wanna go sign up at that new gym that just opened up? I think it’s time to start working out again.”

We went the next day and signed the paperwork.

I was a New Year’s Resolutioner.

I wandered into my new gym shortly after the new year in 2005.

The place was packed.

This was to be expected; the gym was brand new and it was the busiest time of the year. The time when we all take a look at ourselves and try to embark on the path to self-improvement.

I had weight trained a bit in college. I played baseball for a few years at Eastern Michigan, and we had spent some time pumping iron during the offseasons.

I really didn’t know what I was doing.

I didn’t realize it at the time, but our high school and college coaches were woefully under trained in how to properly lift.

But I gave it my best shot. I was getting married in July of that year, and I was determined to not be the “fat groom with a beautiful wife”.

The first time I weighed myself on the gym’s scale, an unreal number stared back at me.

I had gained 33 pounds of fat in 8 months. I had eaten myself into a situation where I had gained around a pound of fat per week.

All of a sudden, I understood why I felt so shitty. I had constant heartburn, asthma, allergies, and I was sick often.

I was always sweating. That was probably the most humiliating part. Doing any sort of activity would cause me to break out into a soaking sweat. Even sitting down to dinner would cause me to have to wipe my face with a napkin.

I was carrying about 80 pounds of excess fat – no wonder I was always sweating. It was comparable to having a large, winter jacket on all the time.

I had to do something about it.

I remember walking into the gym and picking up a pair of dumbbells to do some incline bench presses, and being aware of my huge gut which was peeking out from under my too-small tee shirt.

I remember being envious of the lifters who were obviously stronger and leaner than I was.

I remember feeling out of place, but being determined to keep at it.

The winter turned into spring, and the resolutioners all left. But I continued. Eventually, I was no longer a “resolutioner”. I was a “regular”.

My body began to change. Not huge, drastic changes, but small, incremental changes. I stopped being insanely sore after every workout, and I began to gain confidence in what I was doing.

By my wedding, I had shed all 30 pounds of fat I had accumulated. I looked better. Not good, but better.

As you can see from this picture, I wasn’t lean. But by the time I had taken this shot, I was 30 pounds lighter than I had been. This gives you a good idea of just how bloated I was.

After the wedding, I continued on and kept weight training.

Years had passed before I jumped down the rabbit hole of evidence based fitness. Eventually, I started to analyze my workouts, pay close attention to my diet, and I made some serious progress.

That never would have occurred if I hadn’t been a resolutioner FIRST.

Weight training was my “lead domino”. 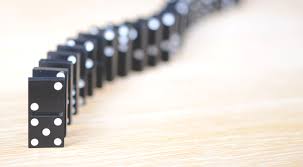 Your “lead domino” is the one habit which sticks with you and starts you down a path.

I continued to lift, and that eventually caused other dominos to fall as well.

Everyone’s path is different, and this was my path.

Nobody gave me any shit in the gym for being a resolutioner. Being 6’8″, 283 pounds helps. Not many people tend to mess with someone so hulking and large.

But not everyone is afforded that luxury.

I plead with them to get over their self-consciousness and take the plunge. I promise them that true weightlifters will embrace them. If they are working hard and trying to improve themselves, almost all will nod their heads in approval.

On more than one occasion, a client has told me that this isn’t entirely the case. I’ve heard stories of equipment hogging, laughing and staring, and otherwise douchey behavior.

And it pisses me off to no end.

Don’t Be A Dick

If the new year is a poor time to decide to change your life and join a gym, then when is the right time?

Is there ever a RIGHT time for you to try to change your life?

Sure there is – it’s called TODAY.

We hear statistics about how obese and overweight our society is, and preach the pitfalls of our sedentary lifestyles.

So, how can we change it if every time we are taking up a bench press, some gym-bro acts like you’re kidnapping his first born child?

Yes, I get it, and it frustrates me, too, at times.

I still train in a commercial gym.

I get a bit annoyed when I have to wait for everything for the first two months of each year as well.

Every year, by March, it’s cleared out considerably and I can get back to doing what I love – training without interruption.

There are always a few who stick with it, though.

It’s true, about 76% of people don’t stick to their resolutions.

But you know what? That means 24% improve their lives permanently.

Which is positively awesome.

It’s really easy to not be a dick to resolutioners this year.

When you see someone new, smile at them and say hello.

When someone is on your favorite machine or station, wait patiently, or go do something else in the meanwhile.

When you see an obvious beginner struggle through a set, tell them nice job, or a simple, “Good set” and grin at them or give them a fist bump.

The gym needs to be a welcoming place. A place of zen. A community of like minded individuals striving for common goals.

Leave your bullshit at home and suck it up.

It’s a temporary nuisance and a “first world problem”. Nothing more.

Because you never know when the next “resolutioner” will go all the way.

There are over 1,000 clients of Anyman Fitness, LLC, who wouldn’t have had the experience of working with us if I was never a resolutioner.

We are making a positive dent in the collective (large) asses of society.

Then so be it.