Come one, come all, and look at the incredible 1 Year, 8 Month, and 18 Day Transformation!

In just 87 short weeks, YOU can have results like him!

And after you look at his muscular shoulder and chest, his lean and toned midsection, and hear about the pounds of goo have come off of his body, come learn how he did it!

Yes, yes, yes, step right up, folks, because Bo is a whole new person now……..and it ONLY took him almost TWO YEARS!

Jason, this isn’t going to sell a fitness program, you moron.

I mean COME ON now.

Nobody is going to want to spend “87 Weeks” working on their fitness.

Where’s the shine? The glitz? The glamour?

Where’s the “fat to abs in 3 months” pictures?

Do you really think people are going to take this article seriously?

If people are actually able to look deep down inside themselves and are REALLY ready to leave the past behind………….then you’re wrong.

If someone is actually willing to realize that true change takes actual work. Sustainable, actionable, retrospective – work. And they realize that this work is ongoing, and it will not just “end” one day………….then you’re wrong.

They actually WILL take this article seriously.

Which is exactly why this article needs to be written. 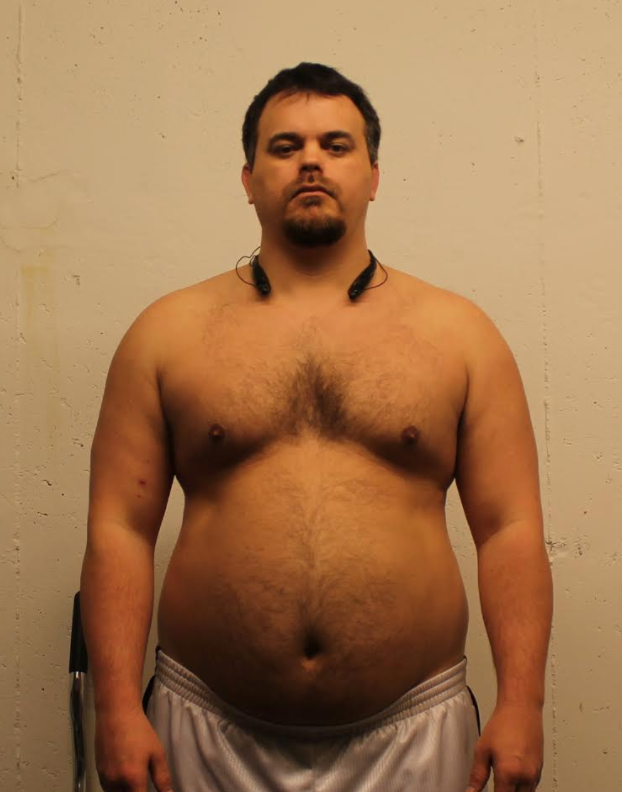 Actually this used to be Bo.

Shortly after this picture was taken, Bo joined our team to help him lose weight, feel better, and get his life in gear.

After our 12 weeks together, here are Bo’s actual “before and after pictures” (you know, the ones that are spit-shined and packaged up to sell “fitness programs” on the interwebzzzzz): 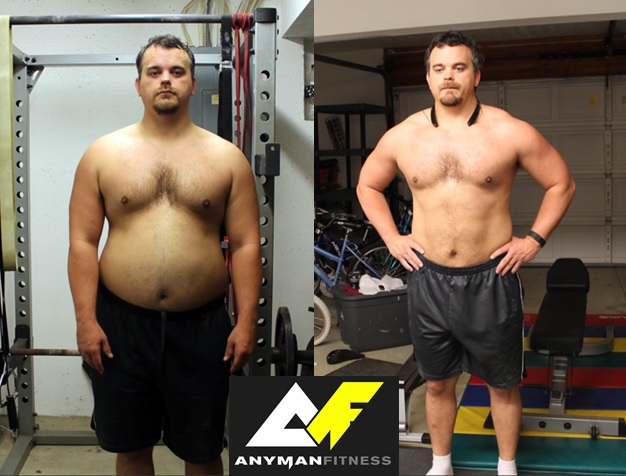 Both Bo and myself were really happy with the results.

He was thrilled with these results, and off he went.

We remained Facebook friends, and he stayed on my email list and we had the occasional back and forth on social media.

We didn’t really chat too much about his progress, but I could tell by his accounts he was keeping “the life” up.

Mind you, this email was sent 1 year and 5 months AFTER he was no longer a client of ours.

It made my day.

I asked Bo for an updated picture, as I was curious about what he looked like now.

He shot me this: 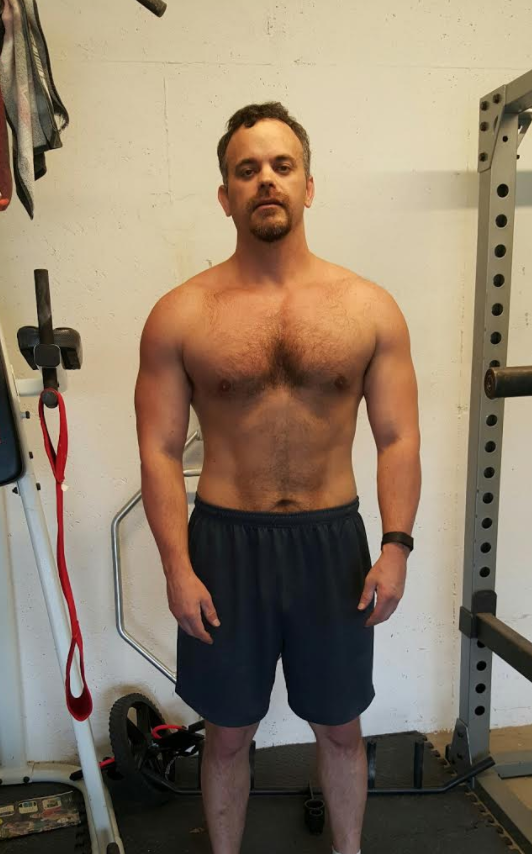 My jaw hit the computer desk after I opened up the file!

Wow, holy crap – Bo had continued to lean out, lost an additional 30 pounds on the scale, and had lost a total of ONE FOOT off of his waistline.

And THIS is what you are actually paying for when you join up for online coaching.

Too many people think online coaching is about the “experience” and having fun for a few months.

They “try it out”, then say “yay, that was fun”, and away they go, to try out the next exercise program.

But that’s NOT what I’m ACTUALLY trying to do.

I want every person who comes my way to leave 100% changed.

With a brand new outlook on nutrition and the life skills to have their own “1 Year, 8 Months and 18 Day Transformation”.

He didn’t do anything “special”.

He just continued to follow the basic principles of our online coaching program and let the hands of time do their thing.

And here are Bo’s “before and after and AFTER” pictures.

This is an actual “1 Year, 8 Months, and 18 Days Transformation Picture”: 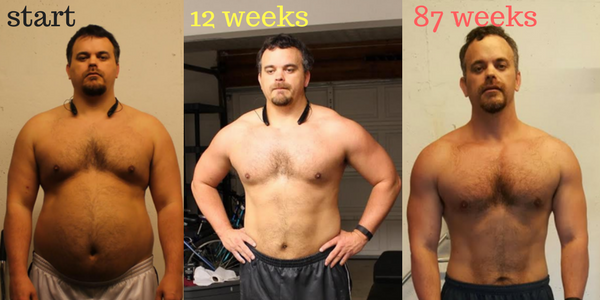 I had a chance to chat with Bo about his journey.

After all, he DID IT.

He has made fitness a permanent lifestyle, and his thoughts on how you can do this should be taken seriously.

What was your “low point”? When did you realize it was now or never, and you had to make a change?

It’s kind of embarrassing, but at my top weight (about 285) and feeling like garbage both psychologically and physically, I looked at getting a gastric sleeve.

I was CRUSHED when I found out my insurance wouldn’t cover it. That low point was a powerful spring board.

What made you decide to hire a Coach?

Oddly, I had years of lifting experience and good lift totals on the big 3 and was pretty knowledgeable with diet/nutrition.

But I was never able to put the diet/nutrition together for a sustained and productive plan.

Reading through some of your writings, it was obvious you were a “no bullshit” coach putting out the “one weird trick” that you see so often.

Also seeing a track record of results coaching others was an important variable as well.

I also wanted to take MY thinking out of the equation.

What was the hardest part about the beginning? Did you ever feel like giving up?

I fall into that category that if the coach told me to eat dirt, I would ask how much.

I attribute that to the LOW I had experienced.

I never once felt like giving up. This endeavor was literally a do or die for me.

So, you must eat super healthy, right? Like salads and stuff? Describe a normal day’s worth of eating.

In my 12 weeks, the first thing I did was cut out protein shakes. I did intermittent fasting and wanted real food.

I did enjoy some salads on my non-training days. I really enjoyed my taco salad with ground beef/turkey.

Every Friday was either PIZZA day or a nice STEAK day. That pizza recipe you give your clients is delicious.

Have you ever felt like a “weirdo” or an “outsider” due to your eating plans?

No–but I’d rather be a “weirdo” than be normal.

Normal is on a medication(s) for a long list of ailments usually caused by the standard American diet.

Obesity (I was morbidly obese at 285) carries with it some very serious medical conditions–none of which I want.

Was it difficult to “keep going” after your coaching experience was over?

As you’ve probably said a 100 times, accountability can be huge.

Not having that after the coaching experience can cause you to regress, as I did–slightly.

But if you can harness the fundamentals learned and have some self discipline to apply them, you have the engine to take you wherever you want.

What is the biggest way improving your fitness has improved your life?

The boost to emotional, psychological, and physical well being feels literally immeasurable.

What would you tell someone who is just starting out on this journey? Any advice?

The vast majority of people have very little knowledge about diet and exercise.

They seek answers and are sent in 1,000 directions by bullshit supplements, fads, and “gurus”.

Find a no non-sense coach with a proven track record of results coaching people.

It will be the best investment you’ve ever made.

And DIET! Not the fad diet or short term diet mentality.

Once you figure out how to feed your body right, you have at least 80% of your problems figured out.

You can eat GREAT foods and have the body you want.

Copyright © 2023. Anyman Fitness, LLC is not in any way associated or affiliated with, approved by, or sponsored by Anytime Fitness
Designed with ♥️ by Aesthetic Pixels